The decision-making process regarding fouling can be driven by the need to solve an acute and recurring problem in the production. A heat exchanger or condenser subject to excessive fouling, with the need to be serviced (manually cleaned) in between scheduled turnaround moments, will obviously benefit from on-line cleaning and the economic advantages are not likely to be challenged.

Heat Exchangers that do not need extra servicing between scheduled maintenance moments may not be considered to benefit from a brushing system and therefore an investment proposal for a brushing system may be more difficult to get approved.  For us, it is difficult to demonstrate the payback period on an Eqobrush system for an existing Heat Exchanger in operation. From our client’s engineering point of view, however, this may be relatively simple, just through comparing the heat exchanger data from different stages of the cycle, just after full manual cleaning until just before cleaning. Good indicators are:

A viable practical approach for industrial users can be found in analyzing the scheduling of factory maintenance. Could fitting critical Heat Exchangers with Eqobrush extend the period between 2 maintenance periods? Are there heat exchangers that require intermediate servicing?

With data as indicated above available, economical advantages can be consistently demonstrated on individual levels.

General industry data on the economic impact of fouling:

For new systems, the question of whether or not to add Eqobrush can be simply answered by comparing the (pre)selected heat exchanger to a “non-fouling” system. Overdesign of practical systems to compensate for the fouling impact start from typically 30% more heat exchange surface. The impact on the total CAPEX of the installation (including additional investment in civil works) ranges from an additional 25% to a multitude of that of a non-fouling design.

In many cases, the CAPEX of an Eqobrush-equipped, non-fouling design, system will be comparable or lower than a traditional design, thus clarifying the issue of pay-back straight away: the system paid for itself before installation.

The benefits mentioned above apply to existing systems as well as to new systems, which means additional cost savings throughout the operational life of the installation. 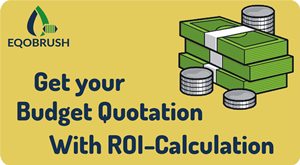